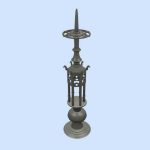 Numerous objects from tenth-century al-Andalus survive in museum collections around the globe – the kinds of objects that would have been used and displayed within munya interiors and other medieval aristocratic residences.

As works of art displayed in museum galleries, such objects are isolated from their original contexts. This makes it difficult to visualize their relationship to the architectural settings in which medieval people would have seen and used them. It becomes difficult to imagine factors such as scale, connections across media, or the visual effects of materials, for instance.

This separation of architecture and object has largely carried over in scholarship, but we know from our medieval sources that the relationships between buildings and objects was tremendously important. Digital technology offers the opportunity to visualize buildings and objects together. Our game includes 3-D models of objects from al-Andalus, based on medieval Córdoban or Andalusi objects preserved in museum collections today.